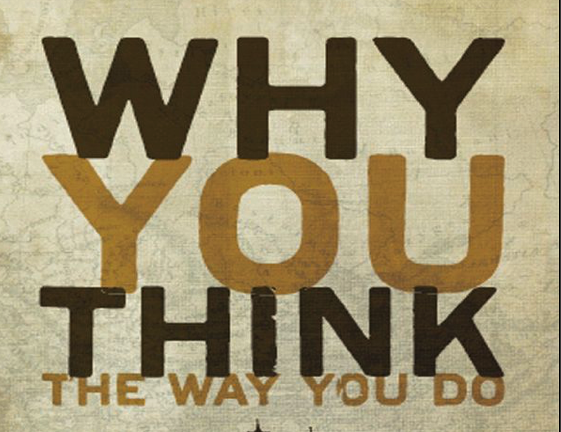 Glenn Sunshine is a Professor of History at Central Connecticut State University, while also serving on the faculty of the Centurions Program of the Colson Center, and as the faculty advisor for Ratio Christi at CCSU. He has a BA in linguistics from Michigan State University, an MA in Church History from Trinity Evangelical Divinity School, an MA in Reformation History from the University of Wisconsin-Madison and a PhD in Renaissance-Reformation History from the University of Wisconsin-Madison. As a Christian and a historian, Sunshine has a passion for helping Christians see how worldview affects culture, and vice versa.

The thesis of Why You Think the Way You Do is that the history of Western Civilization can be traced according to its changing relationship to Christianity. Moreover, the successes and failures of Western culture can be linked to its acceptance or rejection of a Christian worldview.

The book opens with an explanation of the idea of worldview, and how it affects individuals and societies as a whole. It then traces the trajectory of Western culture from the Roman Empire, its transformation by the spread of Christianity, and the periods that followed. The chapters address major periods from the Middle Ages to the renaissance, to the modern “enlightenment” era, to the post-modern period to today. Sunshine shows how changes in worldviews impacted major events such as three great revolutions in England, France and America. This section was especially helpful to understand why the American Revolution succeeded where the Glorious Revolution, and the French Revolutions failed.

As history unfolds in more recent decades, we see the consequences of elevating personal autonomy to the point where ultimate freedom for all means little freedom for some. We see where the only thing considered immoral is considering something immoral. Moreover, we see how struggles for equality have become struggles for privilege by claiming victim status. We see tolerance become meaningless since tolerance entails disagreement, but disagreement is considered intolerance.

Sunshine has painted a clear picture of the consequences of the absence of the Christian worldview in the public square. While the history of Christendom is checkered with its wars of religion, Sunshine gives fair treatment of the issue, acknowledging excesses while noting where these diverge from Christian teaching.

It is not only society, however, that has lost a conscious Christian worldview. This is also missing in much of the Church. We in the church need to read this book and take its lessons to heart if we hope to have an impact on our culture.

This book is accessible to middle-school students, while being rich enough to not bore those with advanced degrees. Church youth leaders and students would do well to study this book. Our future as a nation may well depend upon it.