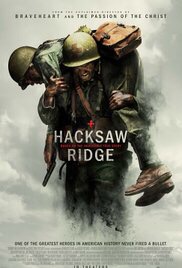 Before watching this movie, I listened to a great discussion my friends at A Clear Lens had with Brian Godawa, a Christian who is a filmmaker (not to be confused with a Christian Film maker) about the film. It is unavoidable to me that my views and comments will be colored by that discussion. There are important details of the film I might have missed if I hadn’t heard the conversation ahead of time. Some of my views will echo theirs. It might be said that this will be a review of the film and a review of a review. (Wow, meta review!)

Desmond Doss was a devout Seventh Day Adventist who grew up in rural Virginia. Although he was a conscientious objector, he believed he ought to serve in the Army during WWII as a combat medic. Hacksaw Ridge is his story.

Seventh Day Adventism includes a principle of pacifism. While Doss did not oppose the war, he was convinced that killing was “the worst possible sin.” It is easy to think of such things in abstract terms that have little relevance, but for Doss, it was real. Moreover, there were two key events in Doss’ life portrayed in the film that had a major impact on his conviction. This is one place where I am indebted to the Clear Lens discussion because I may have missed the connection had I not been watching for it. In a scene early in the movie, Doss is fighting with his brother when he hits his brother in the head with a brick, knocking him out. At first, he thinks he has killed him. Later as a young adult, he intervenes in a fight between his mother and father, removing a gun from his father’s hand and pointing it at him. When he describes this incident to an Army buddy, his buddy says, “But, you didn’t kill him,” to which Doss responds, “In my heart I did.” Not only has Doss been taught to believe killing is wrong, but is keenly aware of his own capacity to do so.

With this background in mind, Doss grows up, meets and falls in love with a nurse, and begins to learn medicine. He joins the army over the objections of both his parents. His mother objects for religious reasons and, well, she’s his mom. His father is especially concerned because he is a WWI veteran.

Doss trains at Fort Jackson. At this point, I find myself in disagreement with Godawa. Vince Vaughn plays the part of the drill sergeant. Because of his comedic roles, Godawa found it very difficult to accept Vaughn in this role. I don’t know if Godawa is a veteran, and if he is not, I don’t mean to be critical of that fact, but it is not at all unusual for drill sergeants and/or drill instructors to say funny things in the course of their interactions. However, God help you if you laugh. Even as a veteran who has seen Vaughn act (perhaps not as much as Godawa,) I had no problem with his performance. It is during this training that Doss’ convictions are put to the test by peer pressure, physical abuse by his platoon mates, and even a court martial. Obviously he makes it through these, since he goes on to the theater of combat.

Mel Gibson, who directed this film, received mixed reviews about the level of graphic violence. However, given the nature of war, as well as the fanaticism of the Japanese on Okinawa, it seemed realistic without being exploitative.

Doss proved his mettle in an action in which his regiment had to scale a cliff about 200 feet high to attack fortified positions. The regiment seized the objective with heavy casualties, and then was forced to retreat by a counter-attack. In the course of these two actions, the regiment was decimated. Doss stayed behind when the survivors who could do so retreated. While naval gunfire bombarded the area, Doss explored the battlefield looking for wounded survivors. As he found each one, he dragged them, one at a time, to the top of the cliff and lowered them by rope. By morning he had done this with 75 men. This feat is amazing in itself even without the risk of death or injury by the shelling or from the Japanese, who were also looking for survivors and killing them.

Hacksaw Ridge is a moving portrayal of courage of convictions, as well as courage in the face of great danger. It is a moving story, but not for the squeamish.