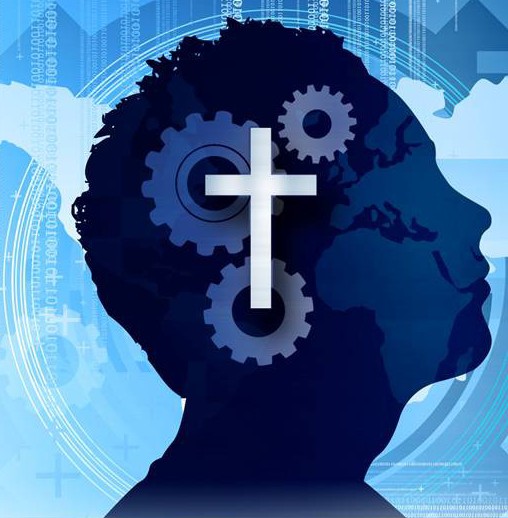 I believe in God, the Father Almighty, the Creator of heaven and earth,
and in Jesus Christ, His only Son, our Lord:
Who was conceived of the Holy Spirit, born of the Virgin Mary,
suffered under Pontius Pilate, was crucified, died, and was buried.  He descended into hell.

The third day He arose again from the dead.
He ascended into heaven and sits at the right hand of God the Father Almighty,
whence He shall come to judge the living and the dead.

I believe in the Holy Spirit, the holy catholic church,
the communion of saints, the forgiveness of sins,
the resurrection of the body, and life everlasting.

At the most essential, basic level, a Christian is a theist. That is, we believe in the reality that God exists. Who or what is God? As Christians, we hold that God has revealed himself through special and general revelation. That is, we can know some things about him through nature and our conscience, and he has given us a written revelation, the Bible. We speak of God as omnipotent, omniscient, omnipresent, loving, etc.

“Omni-what? Omeprezol? Omnomnom… what are you talking about?” Ok, there’s that jargon again. Omnipotent means all-powerful. Omniscient means all-knowing, and omnipresent means God is everywhere at the same time.

It is hard to know where to start. I will start at the beginning and work from there.

Science and philosophy tell us that the universe had a beginning. Our universal experience tells us that everything that begins has a cause, so if the universe, that is all of matter and energy (material), space and time began to exist, it had a cause. This means the cause had to be immaterial, nonspatial, and timeless. Additionally, since whatever caused the universe to exist chose to do so, and choice is something only agents do, the cause must have been personal. (By personal, I simply mean having a will.)

“’Agents?’ Who, the feds? What are you talking about?” In this sense, an agent is a being that is able to choose.

Obviously creating the entire material world requires a powerful cause, and the design shows the cause to be intelligent. To summarize, philosophy and science can point to the existence of a powerful, intelligent, immaterial, nonspatial, timeless personal being. We call him God.

As Christians, we hold the Bible to be divine revelation. That is, God revealed himself though the words of the Bible. What we see from philosophy and science is consistent with what he reveals through his word, which is what we should expect since he is the author of all knowledge. However, in the Bible we are given more information.

“…creator of heaven and earth.”

Genesis 1:1 tells us “In the beginning, God created the heavens and the earth.” We see here that God is called creator in his word. Historically, this is understood as he created out of nothing. Theologians (those who study theology at an academic level) call this creatio ex nihilo. (The Latin is a freebie. It makes everything sound fancier.) In other words, he did not create the universe out of pre-existing material, but he created the very material.

The point of beginning with creation is that God is distinct from his creation, not a part of it or “one with” it. Some would ask, “Who made God?” If, however, they mean the God of the Bible, the question is nonsensical since we understand God to be uncreated. Another way of saying this is that he is self-existent. It means that there was a timeless state of affairs such that all that existed was God. It would also mean God is changeless. This state had no beginning and while it was the case, there was no time. Wait, what? Okay, rabbit trail time. Let me say something about time to make sense of this.

If we understand an event to be a change in the state of affairs, we can understand time to be the relation of before and after between events, as well as the duration of and interval between them. So when the state of affairs is such that all that exists is an unchanging God, such a state is timeless since there are no events. As such, the creation of the universe would be the first event, so that time is created along with matter and space. All this is to say that before he created the universe[1] God existed eternally, which means without beginning. In this state he is timeless.

We see above that the creation entails an immaterial, nonspatial being. We are told as much in Scripture. One example is Jesus’ words to the woman at the well in John 4, “ God is spirit, and those who worship Him must worship in spirit and truth.” (4:24) Spirit is understood to be immaterial and nonspatial. Moreover, Genesis 1:1, as well as John 1, which attribute the creation of all things to God, imply that God himself is not created. The only way something can exist without beginning is if it is self-existent. As Isaiah has said, “I am the Lord, and there is no other; Besides Me there is no God.”

In this post, we have discussed God’s self-existent, unchanging, non-material, and nonspatial attributes. In my next installment, I will talk about God as almighty, or “omnipotent.”

[1] I know that is technically problematic, but for the sake of accessibility I will leave it be