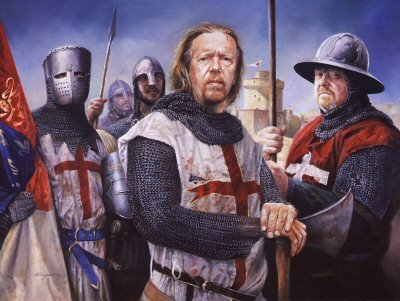 Since Islam has been in the news lately and comparisons made between ISIS and the Crusades, I thought it might be helpful to offer some historical background here. In this post and the next one, I will present a paper I wrote in graduate school.

The crusades were a series of campaigns launched against enemies of Christendom between 1095 and 1291.[1] They have been used as rationale for everything from skepticism and rejection of the gospel to the September 11 attacks. Accounts of the crusades from the period and since tend to either vilify or glorify them, with little in between. Critics often cite the crusades as evidence of the evil of Christianity. Crusades are seen as wars of colonialism against a peaceful Islamic civilization minding its own business until those mean, nasty Christians came to steal, kill and destroy. But is this an accurate picture? How did Muslims come to occupy Palestine, North Africa, Spain, and Anatolia? Did they come on bicycles wearing white shirts and ties, two at a time, bringing their message and winning converts? Did they win over the people through a series of camp meetings that led the masses to repent and accept Allah as their God and Mohammed as His prophet?

Like every war fought in history, the crusades had heroes, villains, beneficiaries and victims. In this paper, I will seek to set the record straight where the crusades are used to discredit Christianity. This is not, however, a defense of Christendom.

The structure of this paper will be to take criticisms offered and respond to them, whether by refutation, or concession where the criticisms are valid.

James Haught, in an article first published in Penthouse magazine, wrote, “The First Crusade was launched in 1095 with the battle cry “Deus Vult” (God wills it), a mandate to destroy infidels in the Holy Land.” [2] One would think from this statement that whoever called for the crusades just arbitrarily decided to tell Christians that they should go and “destroy infidels in the Holy Land,” who are simply minding their own business, because “God wills it.” Reality, as is often the case, is more complicated.

For Muslims, war was part and parcel with Islam, claims by George W. Bush that Islam is a “religion of peace” notwithstanding. Madden explains:

Traditional Islamic thought divided the world into two spheres, the Dar al-Islam (“Abode of Islam”) and the Dar al-Harb (“Abode of War”). The Dar al-Islam consisted of all of those lands directly ruled by Muslims and subject to Islamic law. Dar al-Harb, which included the Christian world, was the place in which Muslims were enjoined to wage jihad against unbelievers, capturing their lands and subjecting their peoples.[3]

Consequently, Muslims did not come to control the Holy Land, or Egypt, or Syria, or Persia through immigration, or friendship evangelism. They had conquered these lands by military force. This does not necessarily justify the first crusade, but the historic context needs to be considered as we evaluate it. Even at this point no call went out to expel the Muslim. Muslim treatment of Christians in the conquered territories did not seem to warrant such a response. It should also be noted that the cries of “God wills it!” came from those who answered the call, not those who issued it. It was a response to the reports of what was happening to the churches and pilgrims in the Holy Land.

In my next post, I will explain what changed and how it led to the first Crusade.

One thought on “The Crusades: Just War or Just War? Part 1”